On Wednesday the 11th of May, Jarrod Field, Marcus Sayoun, Jayden Fama and myself attended a luncheon with Wendy Lindsay, the Local Member of the Legislative Assembly for East hills. We arrived at Parliament House at 11:30 and were welcomed by Mrs Lindsay’s assistant who took us on a tour of the media quadrant. We were able to watch a live press conference and speak to some of the media workers who outlined their day-to-day activities and roles within parliament. After that, we met with Wendy and she introduced herself before showing us around various rooms including their evergrowing art gallery and the NSW Parliament Library, which has a record of every word ever said during speaking time within Parliament. At 1 pm we sat down in the grand dining room and were served a three-course meal consisting of fresh rock oysters, wagyu steak and chocolate lava cake, all provided to us by the generosity of Wendy. By 2 pm, the bells rang for question time. We were able to watch a live debate between Liberal and Labour members, including Mrs Lindsay herself, as they discussed interest rates and infrastructure developments. Overall, it was a very impactful and enriching day as each of us left with inspiring words of encouragement as well as a greater understanding of our state political system. Ryan Garzaniti – College Captain. 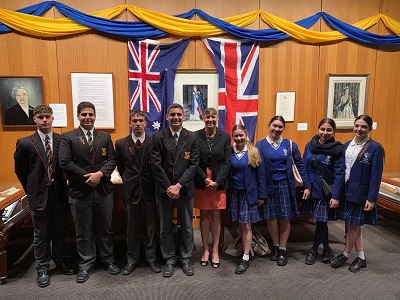 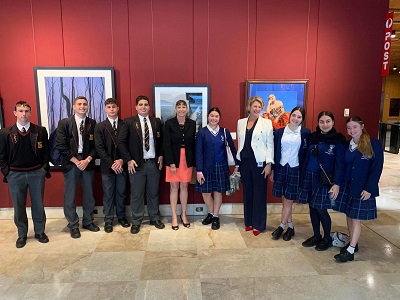