The Law Society of NSW Inter-School Mock Trial Competition gives students an opportunity to learn about our legal system through the court system and its procedures, interacting with other schools and the legal community.

De La Salle College Revesby Heights joins schools from all over NSW to participate in the competition and ranked in the top 20 schools in 2017 and 2018. The Human Society and Its Environment (HSIE) Department run the competition and it is open to Year 10 and Year 11 students at the college. 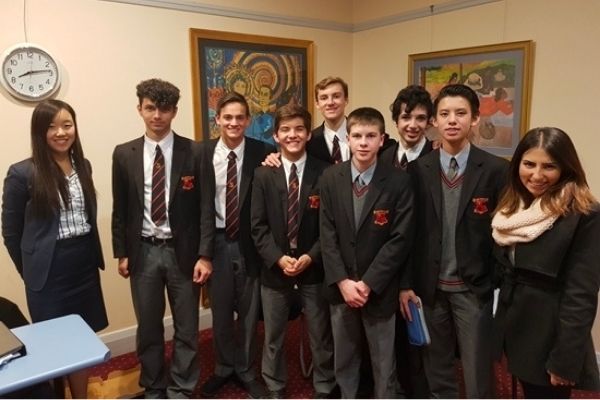 The competition consists of stimulated court cases in which participating student teams contest a fictional legal dispute in a mock court environment. The trials are presided over by a lawyer from the community acting as the magistrate. The case materials for the trials are provided by the Law Society of NSW and are eagerly awaited for  by the team at the beginning of each round. For each round, one school acts as the Prosecution/Plaintiff and the opposing school acts as the Defence/Defendant. Students take on the roles of Barristers, Instructing Solicitors, Witnesses, Court Officers and Magistrate’s Clerks during each round. Students gain many skills through the competition and it is an interesting way for them to learn about our legal system.

All the rounds of the competition that the students participated inwere valuable experiences and provided them with many insights into our justice system and the laws that govern us. Students developed lateral and analytical thinking skills and confidence in addressing an audience. The competition also enabled students to work with others in a team and meet with their peers from different schools. The team has been consistently commended on their ability to communicate legal information in a coherent manner by a number of magistrates.

As part of the Regional Catholic Schools Debating Competition (RCSDC), students are afforded the opportunity to debate fellow students from across the region on a variety of social issues. This allows students to not only develop the confidence and skills needed to speak in a public forum, but also the ability to think on their feet and make arguments that are logical and well supported.

With topics that encompass a wide variety of issues such as politics, sports, social media, the environment and technology, the RCSDC provides a forum for students from all specialisations and interests to be engaged and demonstrate their talent for informed rhetoric. This in turn benefits the students who become more articulate, socially aware and responsible citizens.

In 2018 De La Salle Revesby competed in the Regional Catholic Schools Debating Competition. For five Wednesday afternoons, students from Years 7, 8 and 10 competed against other Catholic schools in the region.

Our best performing teams were our year 7 and 8 students, with year 8 making the semi-finals and our year 7 team taking out the grand final.

All debating students are to be congratulated for not only their performances in the debates but also the way in which they conducted themselves at all times throughout the competition.